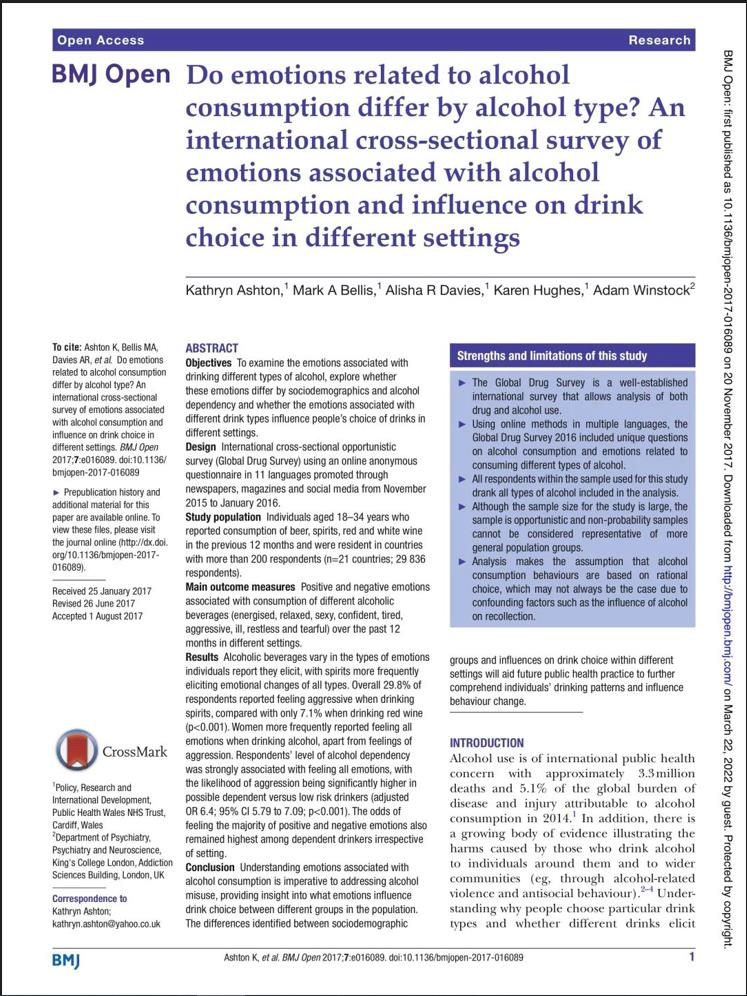 The British Medical Journal, the world's largest clinical general medicine journal, recently published a study of nearly 30,000 drinkers aged 18 to 34 from 21 different countries, all of whom had Experience drinking beer, wine and spirits.

Many of them claim that different types of alcohol can trigger different emotional responses. For example, nearly half of people experience feelings of anger, sensuality, and tears when drinking spirits, and more than half feel relaxed when drinking red wine or beer.

But with a longer drinking history, the body's tolerance to alcohol also increases. This means that you have to drink more to get the same drinking enjoyment as before. Although it is very pleasant to have a few drinks, the researchers still remind everyone that excessive drinking can be harmful to the body. Professor Mark Bayliss stressed that the more you drink, the more likely you are to take the risk of drinking.

Alyssa Davies, head of public health research and development in Wales, who participated in the study, said: "There are many commercial advertisements touting the positive effects of alcohol consumption, but at the same time the negative effects cannot be ignored. Helping people drink in moderation requires giving them a comprehensive understanding of how alcohol affects mood.

Researchers at King's College London and the National Health System Foundation in Wales analysed data from nearly 30,000 adults aged 18 to 34 from 21 countries and territories in the Global Drug Survey. The survey asked about drinking beer, red wine, white wine, and various spirits at home and in social settings.

The survey results showed that red wine and beer were the most relaxing. Of the respondents, 52.8% said red wine helped them relax, and 50% said beer made them calm and relaxed.

As for spirits, only 20% of the survey respondents felt relaxed after drinking it; about 30% said they were irritable and aggressive; and more than half said they felt more confident after drinking spirits , energetic; 42.4% felt sexier.

This is an observational study, so no firm conclusions can be drawn about cause and effect. The survey also showed that the effects of alcohol on mood were related to the education level, nationality and age of the respondents. Respondents aged 18 to 24 tend to feel more confident, energetic and attractive after drinking socially, regardless of the type of drink. The researchers stress that the feelings caused by alcohol may be related to many factors, including advertising, when and where you drink alcohol, and the alcohol content of different beverages.